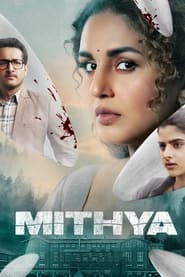 IMDb: 7 2022 26 views
A tale of two women who are at odds with each other over allegations of plagiarism, which sparks a series of hostilities and shocking revelations ...
DramaMystery

IMDb: 7.4 2021 128 min 54 views
A high profile defence lawyer is promised a Rajya Sabha seat if he wins a case of an accused with charges of killing two migrant children. ...
BollywoodCrimeDramaThriller

IMDb: 6.3 2019 140 min 70 views
Ron Sen is a successful sports agent who manages top players from the Indian cricket team. After controversy ends the prospects of his career, ...
BollywoodDrama

IMDb: 8.2 2019 138 min 265 views
Following the roguish terrorist attacks at Uri Army Base camp in Kashmir, India takes the fight to the enemy, in its most successful covert ...
ActionBollywoodDramaWar

IMDb: 7.8 2018 138 min 213 views
An Indian spy is married to a Pakistani military officer during the Indo-Pakistani War of 1971.
ActionBollywoodDramaThriller

IMDb: 5.5 2018 118 min 64 views
The paths of a man and a woman, who have both been recently divorced from their spouses, intersect at an art exhibition in London.
BollywoodDramaRomance

IMDb: 6.2 2017 132 min 115 views
Gaurav dreams of settling down with Kavya, the woman of his dreams, but she prefers a man who’s more adventurous and willing to take risks. ...
ActionBollywoodComedy

IMDb: 5.3 2016 141 min 87 views
An artist wishes to marry her childhood sweetheart and settle into family life. However, her boyfriend, who is a genius mathematician is afraid ...
ActionBollywoodDramaRomance

IMDb: 5.3 2014 146 min 99 views
An adrenaline junkie walks away from a whirlwind romance and embraces a new life as a thief, though he soon finds himself pursued by veteran ...
ActionBollywoodComedy

IMDb: 5.2 2014 119 min 74 views
Dishkiyaoon is a Bollywood action film produced by Shilpa Shetty and her husband Raj Kundra along with Eros International. The film features ...
ActionBollywoodThriller

IMDb: 7.4 2010 126 min 71 views
Ethan, a magician rendered paralyzed in an accident, sets off a furor when he makes a petition to the court to end his own life.
BollywoodDramaRomance

IMDb: 4.8 2009 65 views
Delhi-based Inspector Jay is reprimanded after having an affair with Pooja, the daughter of a politician, and transferred to Bandra, Mumbai along ...
BollywoodCrimeDramaMystery